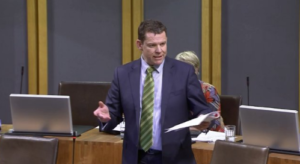 Responding to the announcement from Welsh Government on how the additional £100 million will be spent in NHS Wales – an announcement which preceded the updated NHS Wales waiting lists figures – Shadow Health and Care Minister, Rhun ap Iorwerth MS said –

“The pandemic’s impact on NHS waiting times has been devastating, with thousands of procedures delayed and cancelled, and thousands of people thought to have missed a cancer diagnosis.

“However, we all remember that waiting times were already too high before the pandemic, so this can’t be about returning things to the ‘pre-pandemic normal’. To turn things around, the Labour Welsh Government must introduce a concrete, ambitious recovery plan, that puts NHS Wales in a better position than we were at the start of the pandemic.

He added – “As a matter of urgency, this must prioritise early cancer diagnosis, bringing the undiagnosed into the system and providing effective care for those patients in later stages of cancer who will need more complex treatments.”