Home / “We need to get on with flood defence works”, says AM

Ynys Môn AM Rhun ap Iorwerth has now received a reponse from Welsh government following his questions in the chamber regarding flood defence works in Anglesey after several communities on the island were affected by flooding in November.

Rhun said that he is pleased that this work is now being prioritised by NRW, but that it was a pity that it had taken more floods to make them do that and is disappointed that the investigative work still hasn’t started..

“Presumably investigative work will be about finding evidence for the need for flood defences. I’d say we saw pretty good evidence in November.

“We need to get on with this work in Llangefni and other parts of the island affected by flooding. Every day’s delay is another day of flood victims looking out of the window and wondering if the next rain fall will lead to another flood.”

Rhun ap Iorwerth also added that he supports Anglesey Council’s efforts to press for immediate action and possibly to increase the direct influence it has in flood defences in Llangefni. 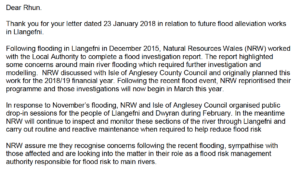