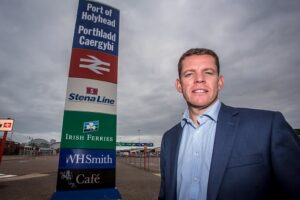 The Member of the Senedd for Ynys Môn has called on Welsh Government for an urgent statement on their plans for post-Brexit Border Control infrastructure in Holyhead, set to be in place to facilitate checks on EU goods at the end of the year. In recent weeks, it has come to light that HMRC have failed to identify an alternative site for their new customs post in Holyhead and have therefore proceeded with the purchase of Roadking Truckstop, resulting in the loss of 24 jobs.

Rhun ap Iorwerth stressed that the lack of transparency and communication from HMRC on their plans emphasised the importance of informing the community of Holyhead and the people of Anglesey on Welsh Government’s plans for the new Border Control post.

“I’ve called on Welsh Government for an urgent statement on borders infrastructure in the port of Holyhead. There are parts of the infrastructure that are the responsibility of the Welsh Government and parts that are the responsibility of the UK Government. Clarification is needed – I’ve had enough of the lack of transparency and communication from HMRC, and am yet to receive a response from them following the recent understanding that they have purchased the Roadking truck stop, where people will be losing their jobs.

“We need to know exactly what the position of the Welsh Government is on this. What discussions have Ministers had with the UK Government on jobs and assurances for people working in Roadking now, in terms of getting jobs in the new tolls development? Will they be able to move immediately there without a break in their employment? What will happen to the lorries that have been parking in Roadking? It’s such an important resource, as part of the port infrastructure.

“I’ve also heard that the Welsh Government is moving the development that was being prepared from Parc Cybi into the Roadking development. The community of Holyhead and the people of Anglesey need to know what is happening as a matter of urgency.”

“I’m sure the Member is aware that the Welsh Government was brought very late to the party by the UK Government in relation to the borders infrastructure that is going to be needed, both in Holyhead and, obviously, in south-west Wales. The Minister for Economy is leading on this area, and I know he’s currently looking at some advice around this. I will ask him to bring forward a written statement when he has more information to share with Members.”