Home / Rhun ap Iorwerth pays a visit to Trearddur Bay RNLI Station to thank them for their service. 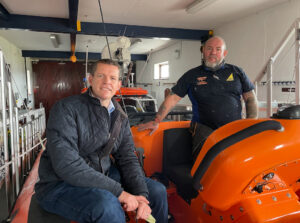 Rhun ap Iorwerth MS went to meet some of the crew at Trearddur Bay Lifeboat station to thank them for their service and to warn about the dangers of the water, and how to stay safe this bank holiday and summer season.
He met up with one of the crew Dafydd Griffiths, who was involved in a major callout last week when the crew were informed that one surfer had made it ashore whilst the other was still in the water. After a short search they located the casualty near Cod Rocks approximately a hundred meters offshore from Trearddur Bay beach. Dafydd described the incident as one of the worst he has seen in over 20 years of volunteering for the RNLI.
Rhun ap Iorwerth thanked the crew for their hard work and stated that “the RNLI are always there for us”.
Dafydd urged that people stay safe this bank holiday and summer season saying “If you’re going out on the water, let the coastguard know where you’re going, what time you’ll be back, and try not to go on your own, state how many are in your group and enjoy yourself – we have a lovely coastline here”