Ben Lake MP and Rhun ap Iorwerth AM demand “not a penny less” while unveiling their Shared Prosperity Fund Plan for Wales.

Despite promising a consultation on the design and implementation of the fund before the end of 2018, the British Government is yet to publish any details about the new system for allocating post-Brexit funding on a UK wide basis.

Between 2014 and 2020, Wales will have received over £2 billion from the European Union through European Structural Funds. These funds are designed to reduce regional inequalities by helping to support people into work and training, youth employment, research and innovation, connectivity and a wide range of development projects.

During the 2016 referendum, the Vote Leave campaign promised that Wales “wouldn’t lose a penny” if we left the European Union, instead claiming Wales would be a “better off”. The British Government has not, however, confirmed whether the current level of funding will be maintained long-term if we leave the EU. 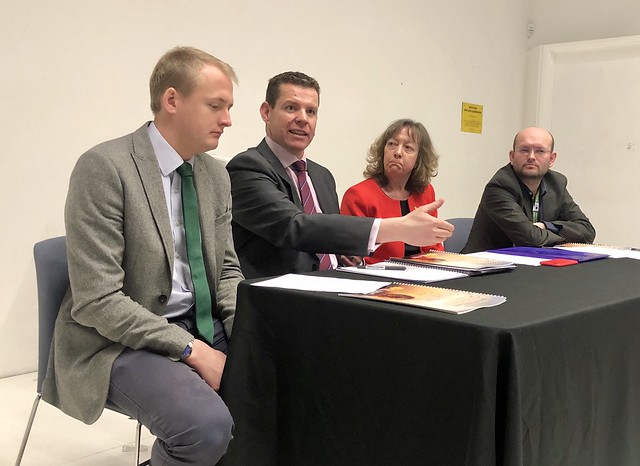 “Vote Leave promised that Wales would not lose a penny if we voted to leave the EU – Plaid Cymru is holding them to account. Wales currently receives £245 million more a year from the EU than it pays in, reflecting a chronic underfunding by the UK Government.

“The principle of regional redistribution is embedded in the fabric of the EU, while an obsession with London is embedded in that of the UK. The worst inequality of any EU Member State is between London and Wales – leaving the EU would make this worse.

“Despite the British Government’s empty promises of a Shared Prosperity Fund, we have seen no details or information on the status of the consultation. In the absence of any proposals from the British Government, our plan would ensure that our communities continue to receive vital funds, regardless of our position in Europe.

“We make clear to Theresa May that Wales must not receive a penny less under the new Shared Prosperity Fund than we currently receive from the European Union.”

Rhun ap Iorwerth AM, Plaid Cymru’s Spokesperson on the Economy and Finance in the Senedd added:

“The complete lack of information and forward planning on this essential funding stream is completely alarming.

“Tinkering around the edges and settling for a low-pay, low-skill economy in Wales will no longer cut it – we need proper planning and genuinely transformational large-scale, ambitious infrastructure projects.

“While the form this fund takes is crucial for us to hold Vote Leave to account on their promises and to begin to reduce regional inequalities across the UK, it should only make up one small part of the future funding model we envisage for a New Wales.

“Remaining in the EU is the best-case scenario for Wales but, as a responsible opposition, we are preparing for all eventualities.”