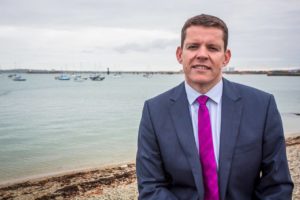 With less than a week to go on the consultation, MS for Ynys Môn is asking the people of Holyhead to make sure their voice is heard and to share their views on the latest proposals for a waterfront development. Many positives could come out of the properly thought out and locally supported development in the inner harbour, but following controversy around the original plans, it’s important that lessons are learnt. I believe Holyhead can benefit from having the right development in place. The loss of the Marina due to storm Emma two years ago has been a blow. But any scheme must be one that is sensitive to the needs and aspirations of the people of Holyhead. They are the most important in this, and I encourage people to have their say. I know for example, that many concerns remain about the impact on the Newry beach area itself. I had argued for shifting westwards, to include renovating the Porthyfelin House and Soldiers Point House, but that is now in addition to the Newry development. I want to ensure that people have their say, so that issues relating to potential overdevelopment, protecting local amenities, the nature of the housing being provided, and impact on the local community are genuinely taken into account.