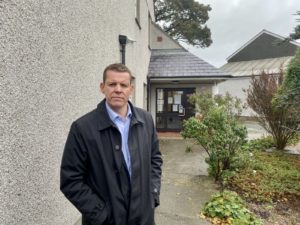 After nearly two years of intense struggles with primary care in Holyhead, the MS for Ynys Môn has welcomed the news that three GPs have been recruited. Rhun ap Iorwerth sees this as an important step towards stabilizing services, but he has some way to go, including the need for a new health center.
The lack of doctors was one of the main reasons why Betsi Cadwaladr University Health Board had to take over responsibility for Longford Rd and Cambria surgeries in 2019, and since then – particularly in the wake of the challenges of the pandemic – Mr ap Iorwerth has received complaints upon complaints from patients who have had difficulty accessing services.
Mr ap Iorwerth said:
“I am pleased that the Health Board has now confirmed that three new doctors have been appointed. We can now start to look forward to rebuilding services, and I know that all three will be welcomed in Holyhead. But the problems of the last two years have shown that we need more than just these appointments to create modern and durable services.
Mr ap Iorwerth says that a “new health center will be needed as part of the solution. As a community we have succeeded in making that a priority, and I recently heard that discussions with Anglesey Council on a health center site are constructive. I think that that should be right in the town center, so that health care needs can also be linked to the wider social and economic needs of the area. I have encouraged the large central old Woolworths site to be looked at, with ample parking.
The three new appointments were confirmed in a letter to Plaid Cymru Councilor Trefor Lloyd Hughes.
Cllr. Trefor Lloyd Hughes said:
“It is shameful that in Holyhead we have had to wait for over two years for doctors to come to both practices.
He added – “The Health Board has to outline exactly what the changes will mean for patients at Cambira and Longofrd Rd surgeries.”
Rhun ap Iorwerth has also been assured that changes will be made to the telephone system and the E-consult system. The Health Board says that they have updated the telephone system very recently, and that it is already making a difference.
Rhun ap Iorwerth, Plaid Cymru’s Health and Care spokesperson, said:

“I would like to thank the staff who have tried to continue to offer services in such difficult circumstances, and I am also grateful to everyone who has contacted over the years to share their concerns about the situation of both practices.”